Choosing panel components often comes down to “What’s the lowest-cost device that meets all application requirements?” Some OEMs and panel builders answer incorrectly without a good understanding of the differences between UL 98 and UL 508.

When assembling mechanical devices, it’s usually easy to tell when components fit together. Putting a half inch ID nut on three-quarter inch OD bolt simply won’t work. But when it comes to assembling control panels, poorly matched components aren’t nearly so obvious. That’s a problem because all of the components not only have to work together safely and properly, they also need to comply with various standards or other requirements.

Disconnect switches are a perfect example. The need to switch power on and off is common to every industrial process, but the appropriate technology to accomplish it is quite different. Just because two switches have comparable functional specifications, that doesn’t mean they can be interchanged.

A critical difference is whether the switches comply with the UL 98 Standard for Enclosed and Dead-Front Switches or UL 508 Standard for Industrial Control Equipment. Selecting devices that comply with the appropriate standard enables control panel builders to deliver the right technical solution to meet the application requirements, while also ensuring cost-competitiveness for their panels.

UL 98 versus UL 508
In general, you can say that UL 98 components are “safer”; their design offers additional protections compared to UL 508. For example, UL 98 components have greater physical separation of conductor connections. UL 98 specifies one inch through-the-air while UL 508 is a half inch. The greater distance provides increased fault protection.

Also, the testing requirements for UL 98 are far more stringent because those switches can be used in a wider variety of applications with greater functional demands, such as branch circuits. The UL 508 switch, on the other hand, is basically a manual motor starter, used much lower in the control system.

But relying on UL 98 instead of UL 508 components doesn’t necessarily result in a better panel. It’s much like using a higher-octane gas in your vehicle than the manufacturer recommends. Higher octane does not deliver higher performance or any other benefits. What it does do is add cost to your fill up. The same is largely true of using UL 98 components instead of UL 508. It probably won’t create a higher-performing or more-reliable panel, but it will definitely create a more-expensive panel.

A panel equipped with UL 98 components obviously will be a more robust panel with a longer operating life, but it’s also often overkill for the application. Panel buyers won’t pay the added cost – typically two to three times higher – for UL 98 components that are beyond their specified requirements.

Besides the cost difference, there is another drawback to substituting UL 98 components where UL 508 will do the job; the UL 98 components are considerably larger. The increased conductor separation discussed earlier drives increased component size, which requires bigger panels, increasing the cost of the panel. 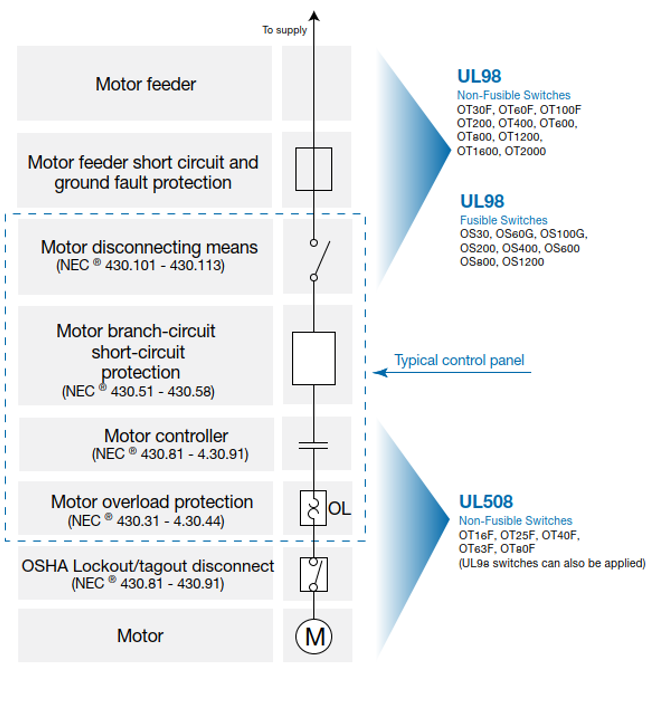 IEC & CE versus UL & NEC
A common source of component confusion occurs when OEMs or panel builders sell panels internationally. In European-made panels, you may see UL 508 components used as main-panel disconnects; while in the US, UL 98 or equivalent is required. That’s because the European standards don’t make the distinctions between disconnect switches like the U.S. does for UL 98 and UL 508. That clearly IS a critical distinction that must be made for panels coming into the U.S.

For US-based OEMs and panel builders looking to export, it’s equally important to understand what’s actually required in the destination market. An application in the US that would clearly require the UL 98-type product may be acceptable in international markets with UL 508-type product. In those cases, using the more-costly components will price the exporter out of the running.

The right component for the job
Many OEMs and panel builders have a good feel for when to select UL 98 or UL 508 components, but don’t understand why, or the problems created by selecting the wrong component. It comes down to UL compliance. You wouldn’t want to deal with problems and delays at commissioning due to non-compliant components being discovered in the panel.

You also wouldn’t want to over or under price panels by selecting the wrong components. Part of the value-add offered by OEMs and panel builders is understanding the standards and specs to provide customers with panels that fully meet their requirements at the lowest possible cost. Doing so will also help ensure that you earn more of their panel business.